In the vegetarian area of Dutch supermarkets and at organic shops, 2 kinds of meat substitutes are offered.

a. The traditional meat substitute : Already 2.000 years on the market and blown over from Asia to Europe: tofu (tahoe), tempeh and seitan.

b. The newer products: they seem like meat, poured into a sausage-, burger or schnitzel form. It is indicated on the label of which the meat substitute was created; such as soy, wheat, vegetables, cheese, or a combination of these.

Most meat substitutes contain soy. That is why it is important to take note of the effects of soy cultivation, as explained below.

Whether GM-crops[3] lead to decreasing or increasing quantities of plant protection products is highly dependent on the type of crop, the region in which it is grown, and the applied cultivation practice.

Tofu is made by soy milk to clot with a rennet (a naturally occurring mineral). It looks a bit like cheese and has little taste or smell, but easy takes the taste of herbs and/or sauces.

Tempeh: Tempeh is made by cooked soybeans to ferment with a Rhizopus mould. What can you imagine you there at: cooked soybeans go together with the fungus in a sealed bag with a few tiny holes and let this 2 days in a warm room. Bind the soybeans by the fermentation and the result is a solid white cake.

Seitan: Seitan is originally from Indonesia. It is made from wheat gluten. Wheat gluten are gluten, a certain kind of proteins, which wheat contains. The production process is as follows: first, a dough made of wheat. By kneading this dough firmly gluten are formed. The kneaded dough is then rinsed with water to flush away the starch and bran. What remains is a glutenball, similar to chewing gum. The wheatglutenball goes in a pan of water with added tamari soy sauce, seaweed and ginger.

In june 2009 a report was published in which the environmental effects of the various meat substitutes were compared. 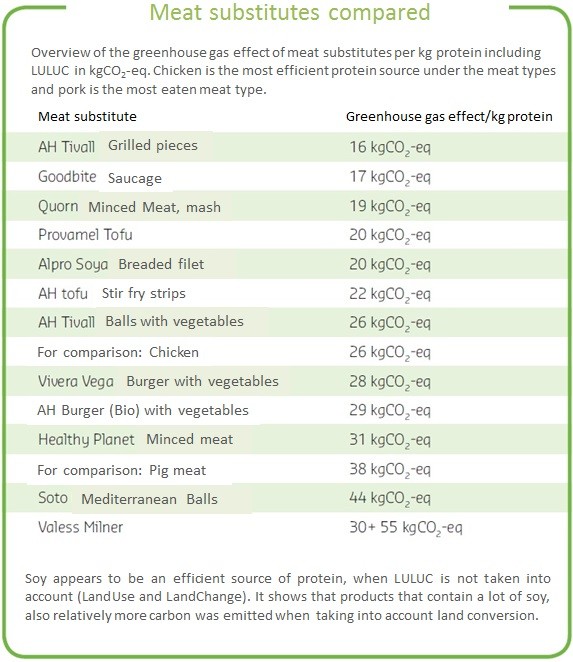 Figure: Overview of the greenhouse gas effect of meat substitutes per ton product.

Conclusion: in relation to the new meat substitutes I apply the following rule: Anything above the environmental impact of chicken meat is not included in the recipes section. Tempeh, Tofu, Seitan, Meatless, VegetarianButcher, Quorn and meat substitutes, for example, Tivall, Goodbite and Alpro soya are in my estimation a good substitute for meat (provided cheese is not an ingredient).