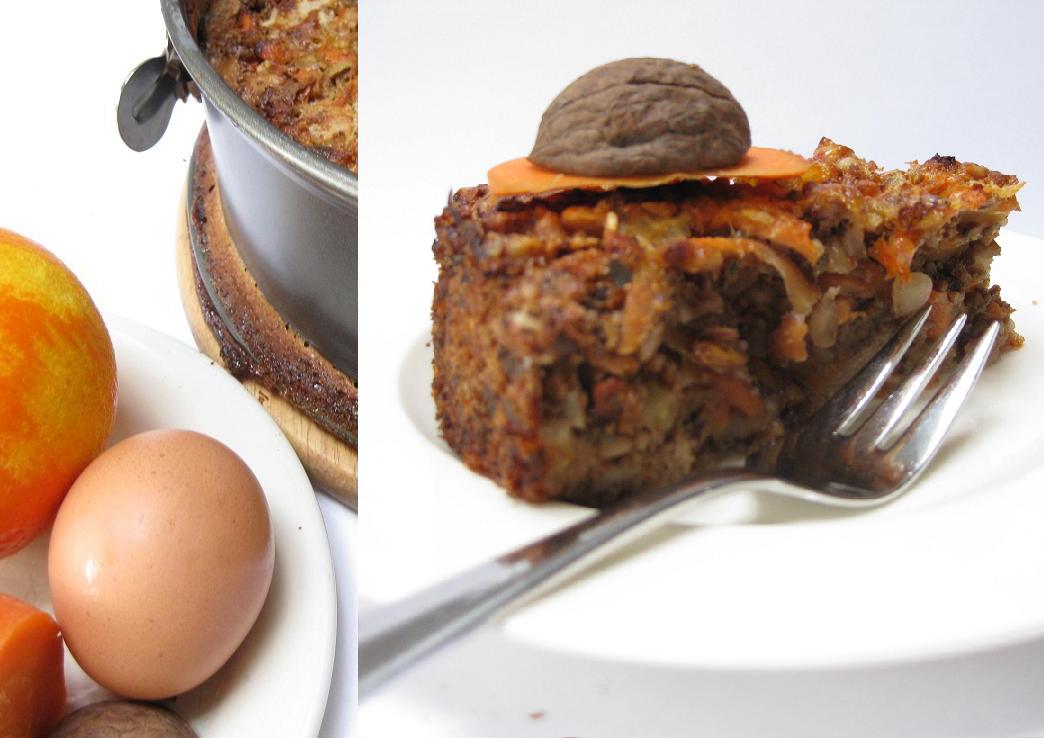 Grate the carrots and chop the hazelnuts finely. Mix the crushed hazelnuts with 4 teaspoons baking powder. Separate the protein of the egg yolks. Beat the egg yolks with orange juice and zest until a thick foam mass is formed, add the sugar and mix too. Whip the proteins with a pinch of salt until stiff. Gradually stir with the yolk mass. Mix this with the hazelnuts and grated carrots. Put the dough in a greased cake pan and bake about an hour in the oven at 180 degrees.
Mix the orange marmalade with some water and spread the topping over the cake. 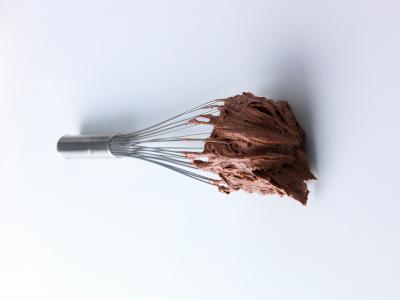 “Que hay” is Spanish for “what there is.” According to whether there are things left you can make chocolate mousse, strawberry mousse or example Baileys mousse.

Split the egg and the egg white. Whip the cream until stiff. Now mix all the ingredients together, not too smooth, otherwise the eggwhite loses its stiffness. Put the mixture in the refrigerator for at least 3 hours and then divide it among 4 plates, for example, an ice cream spoon. You can also divide the advance into 4 bowls or glasses. 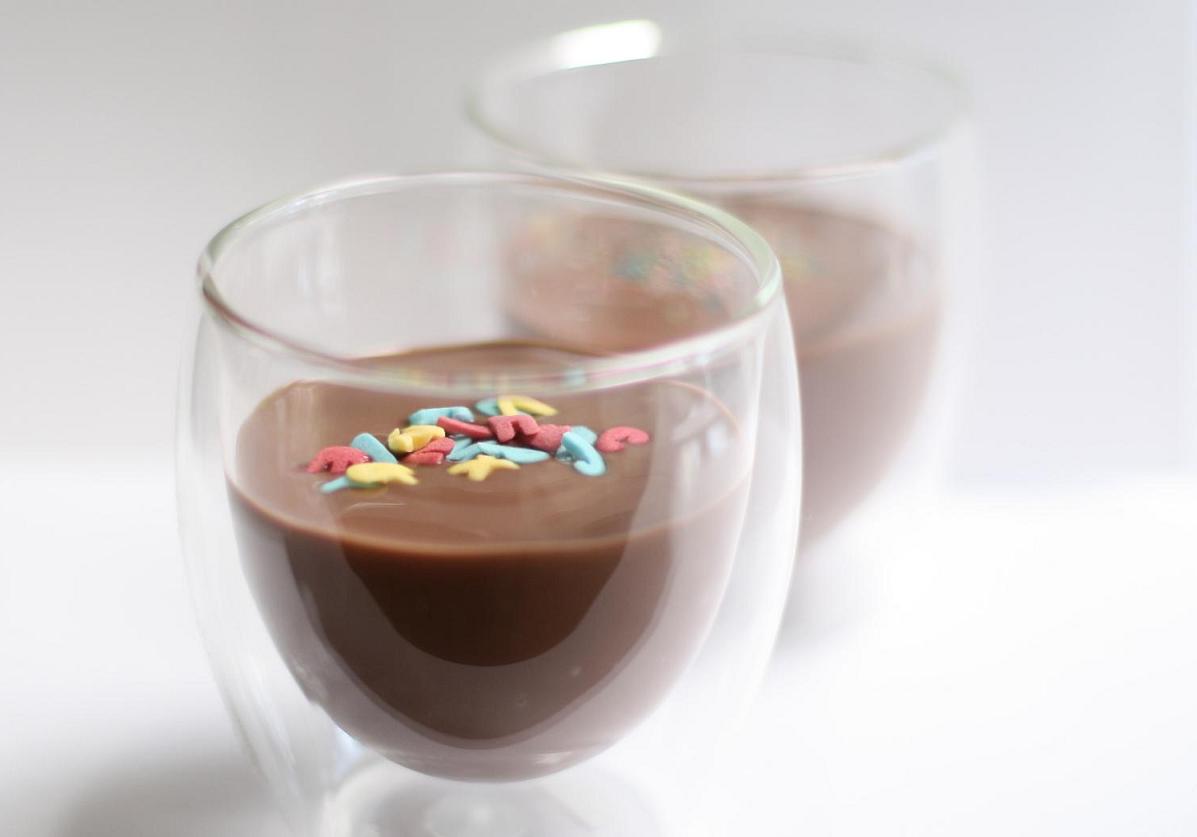 Now you might think this is a very simple dish. That is exactly the point. We must also encourage thinking about a “vlaflip” being really good enough for us! About 4 cups custard distribute and litter Sprinkle. 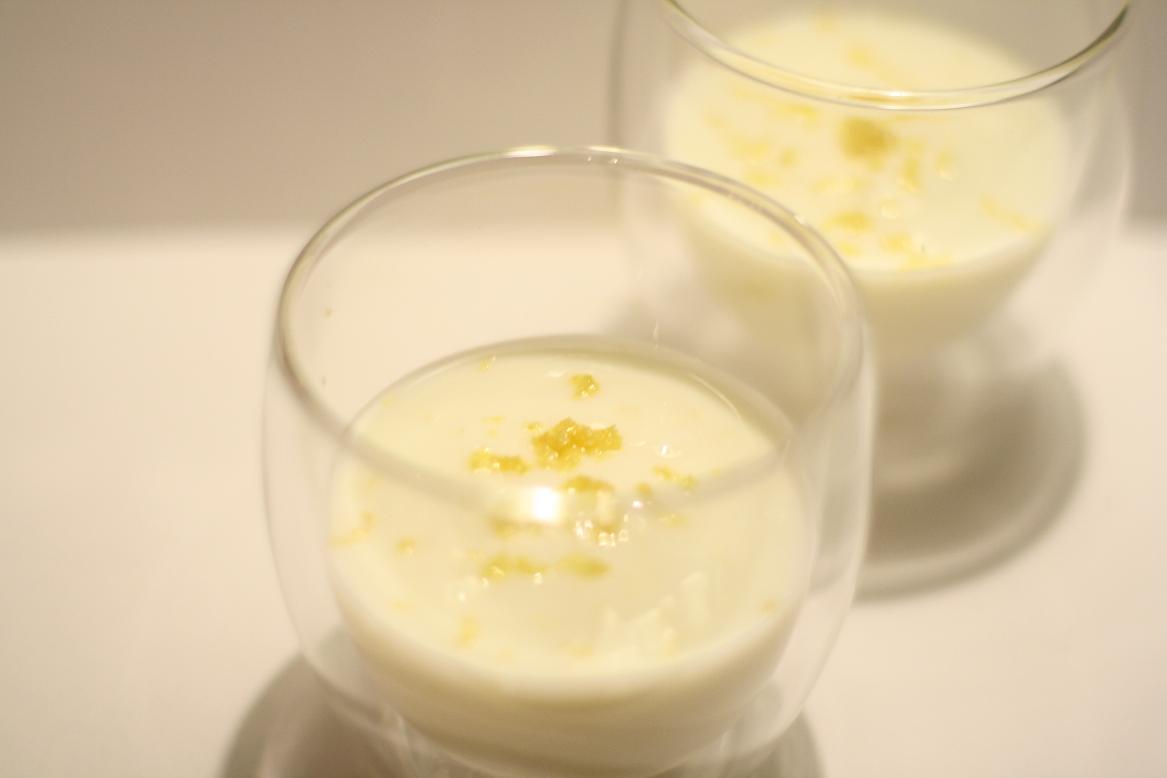 Was one lemon. Grate the zest of 1 lemon and keep the zest. Squeeze out the juice of 2 lemons. Mix yogurt, cream, sugar, lemonjuice and zest well and divide among 4 glasses. Then leave it in the fridge for 1 to 2 hours. 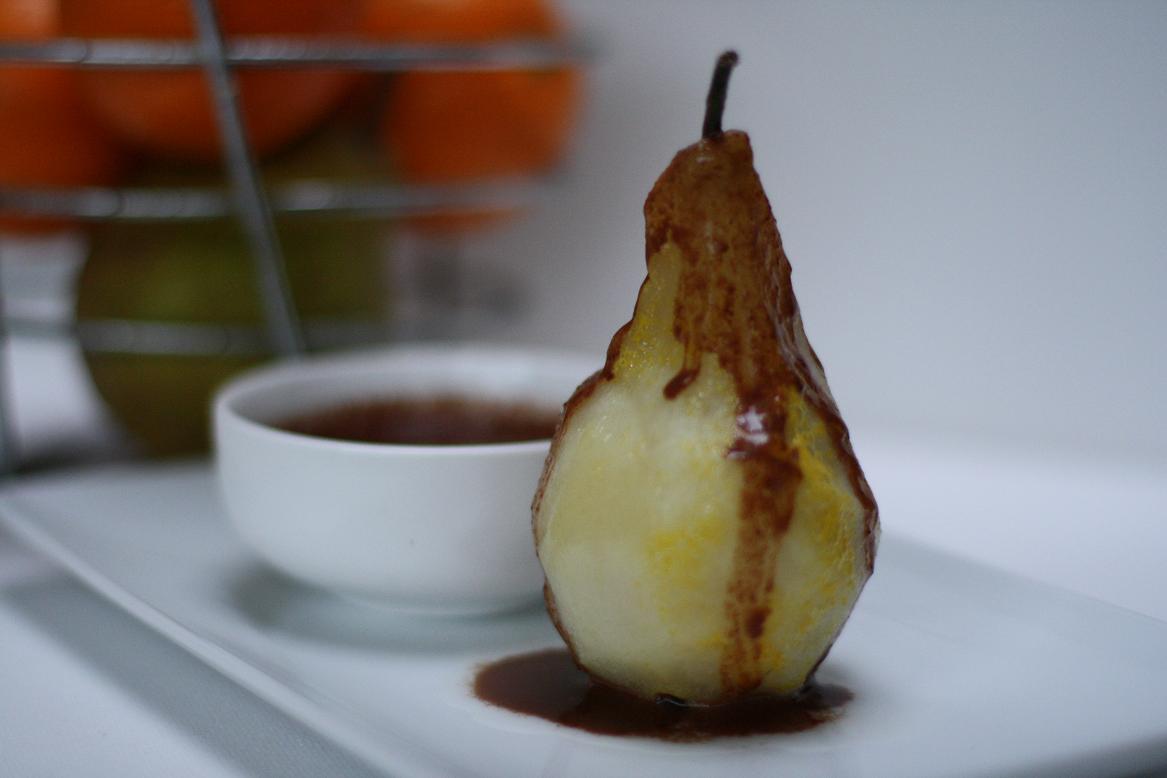 Wash 1 lemon. Grate the zest of 1 lemon and keep the spreads. Then press the lemon. Press oranges.

Peel the pears, except the stem. Put the pears 1 / 3rd under water and bring to the boil. Do not add more water, because it takes longer to thicken and the pear will cook well via the steam too. Add orange juice, lemon zest, lemon juice, 125 grams of sugar (5 large spoons) and cloves to the water. Let the pears cook gently (lid on) until soft, about 15 minutes. Remove the lemon peel and cloves. Let the cooking liquid to thicken. Break the chocolate into pieces and add to the cooking water. Allow the chocolate to melt, stirring constantly. Mix peanut butter and 75 grams of sugar and your chocolate sauce is ready.

Remove the pan from the heat and stir in the cream. Allow the sauce to cool.

Serve the pears upright (perhaps you need to cut right the bottom of the pear) with chocolate sauce.

Bring the milk with the lemon zest to a boil. Stir in the semolina, sugar, cinnamon and salt milk. Let it boil, stirring until it has reached pudding thickness. Serve with fresh berries or a fruit sauce (heat jam with 4 tbsp of water). Use delicious Curve Rhenish Cherry sauce, if you live nearby Utrecht.

(The) Baked pear with roasted almonds 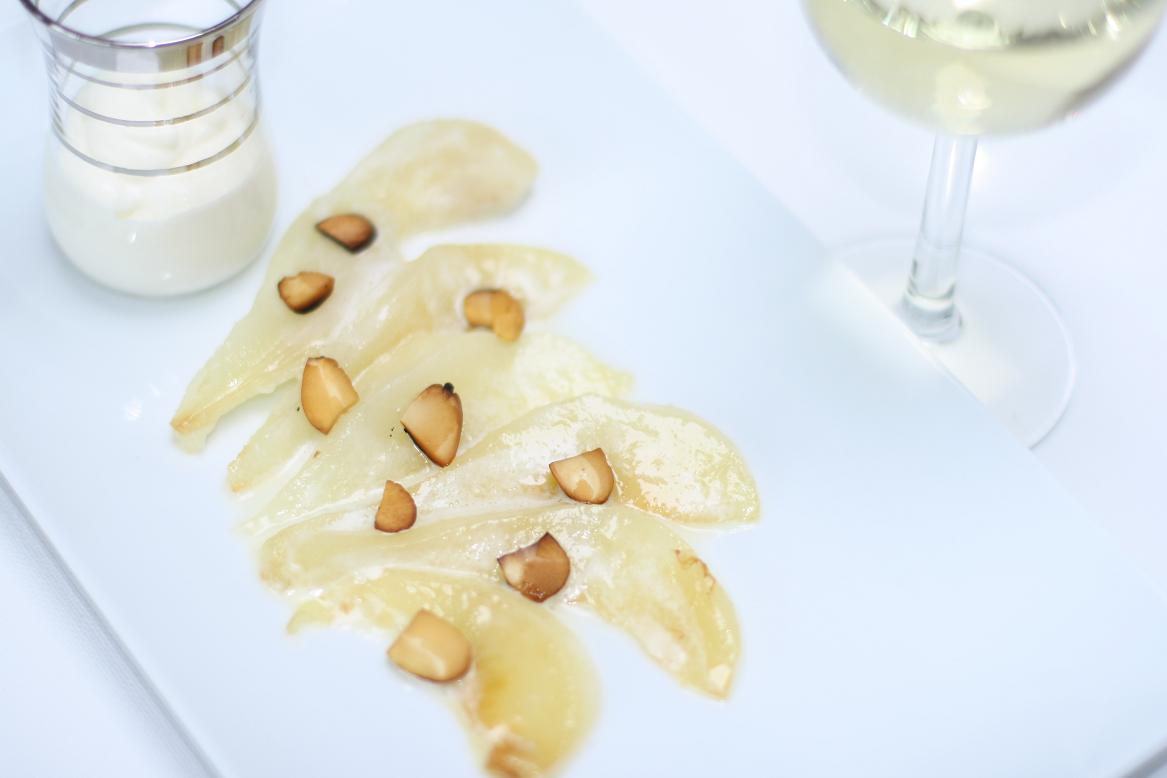 Peel the pears and remove the core. Cut the pear into wedges and grill for 3 minutes in a pan. Toast the almonds in a skillet until they see brown. Whip the cream until it is lobed.

Serve the pears to overlap with a dollop of cream, sprinkle over the toasted almonds. 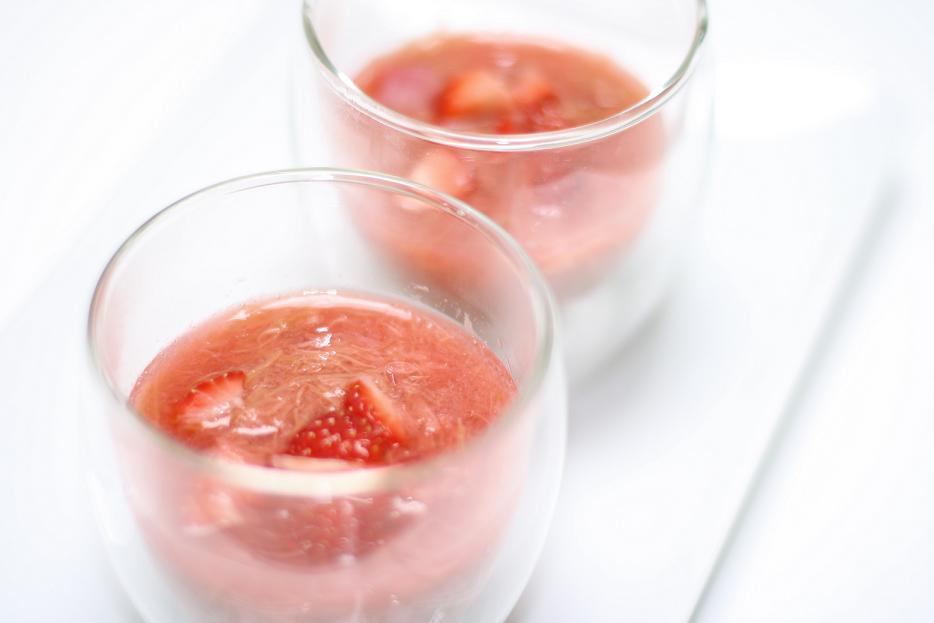 Cut the rhubarb in small pieces and let it together with the sugar, vanilla sugar, strawberries (keep some behind strawberries for garnish) and 1.5 cups water to boil until the rhubarb is tender. Remove the foam off.

Mix cornstarch with a little water and add to the soup. Let the soup boil for 1 minute.

If the rhubarb soup has cooled it can be served. Serve with small pieces of strawberry on top.

Ps Add cretaceous is no longer necessary, since it is known that a little oxalic acid is not harmful.

Pour into a pan of white wine, cinnamon, sugar and bay leaves in the pan. Sauté the figs with cross left indentation on top for 5 minutes. (Put the lid on the pan.)