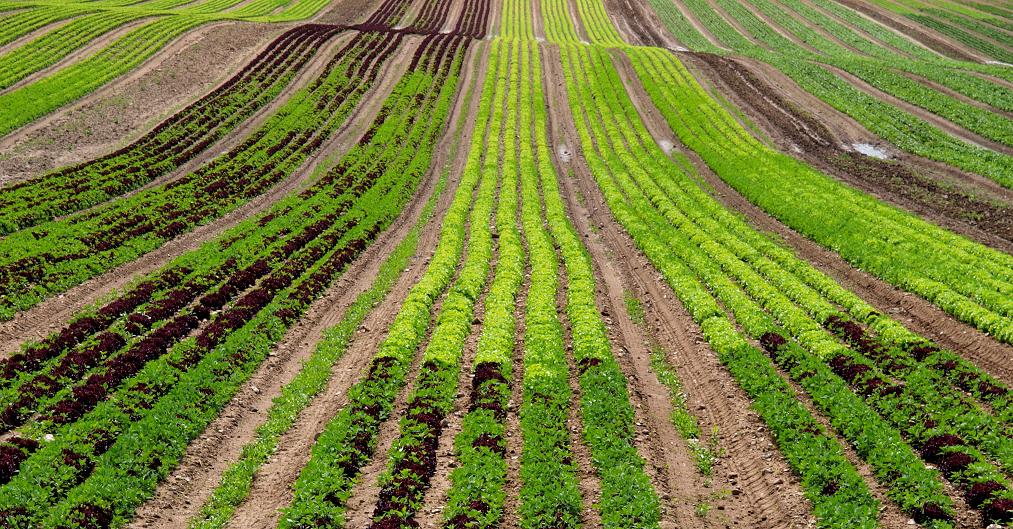 Wash the corn salad. Peel the orange: remove the white parts and cut the orange in thin slices. Peel the onion and cut in rings. Scoop in a bowl gently the iceberg lettuce, Orange, chopped nuts and onion together. Serve with yogurt sauce. 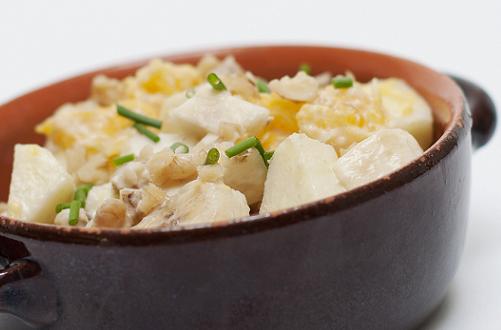 The celeriac peel, wash and grate. Divide the peeled apples, oranges and banana into pieces. Pour lemon juice over the fruit. Chop half the nuts finely. Mix everything together with mayonnaise. Season with salt and pepper. Serve waldorf salad with a few walnuts withheld.

Pointed cabbage with curry and raisins 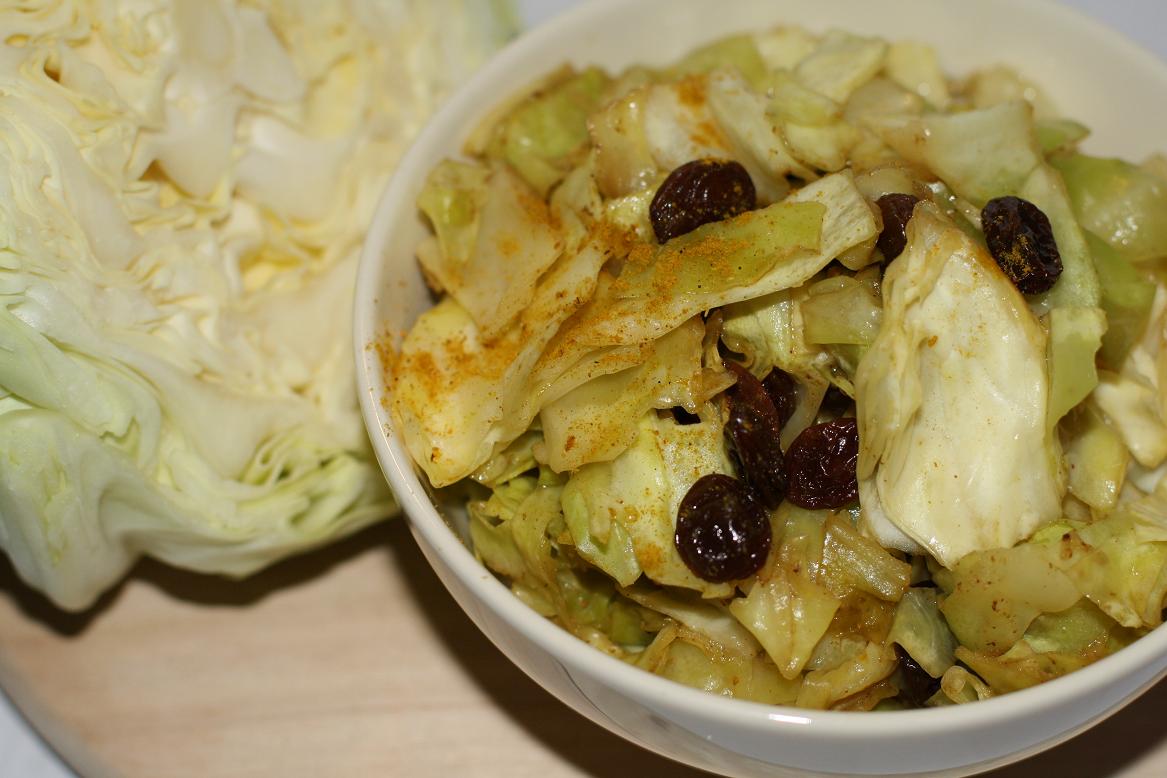 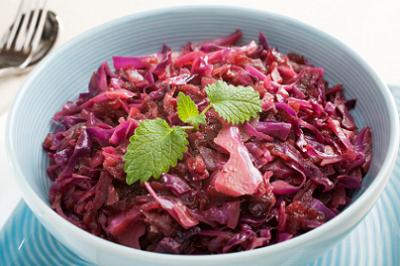 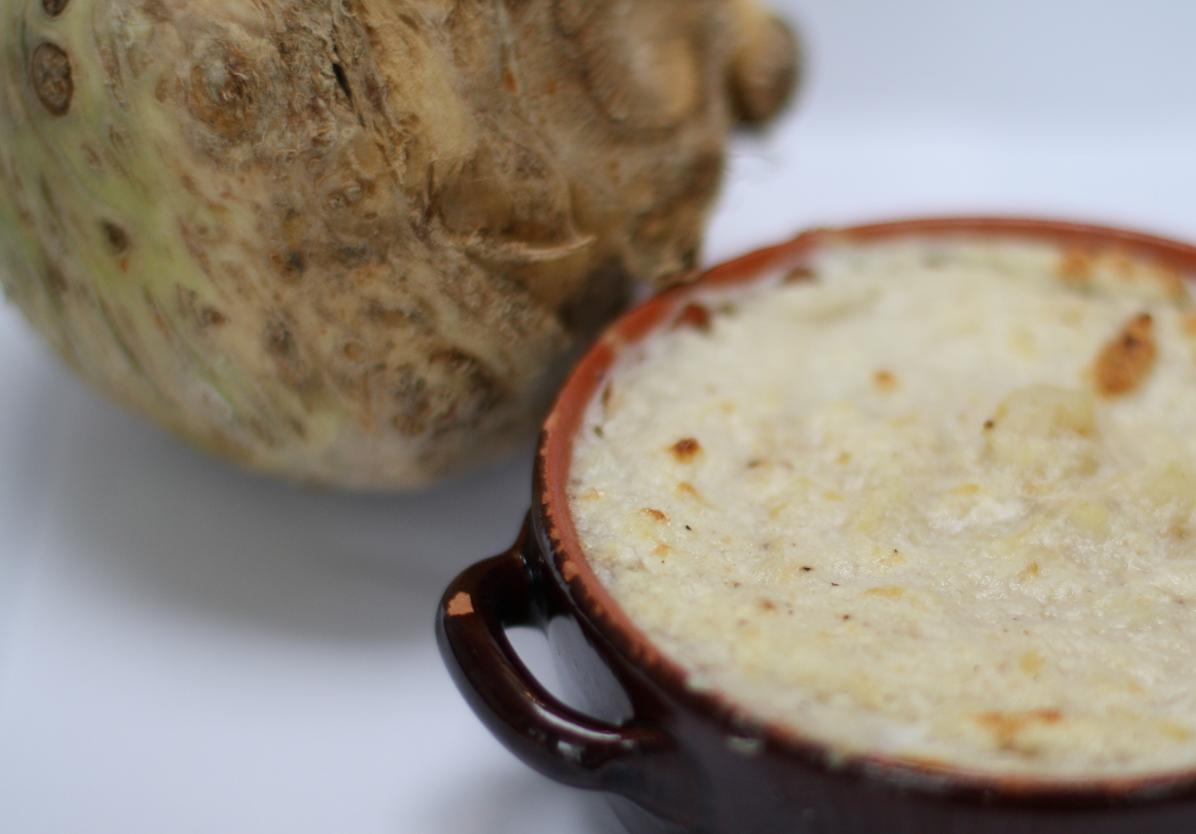 Peel the celeriac and cut into cubes. Add the celeriac cubes in a pan (preferably pressure cooker) with a layer of water pinch of salt and bring to the boil. Allow 10-15 minutes by boiling, in the case of an ordinary pan. Puree the soft celeriac cubes and the broth, 2 cups milk and salt / pepper. Mix 100 grams of grated cheese or cream cheese through it. Stir 3 egg whites. (Keep the yolk for example an omelette.) Divide the celeriac mash into 2 large soufflé dishes. Put 5 to 10 minutes in the oven at 200 degrees. 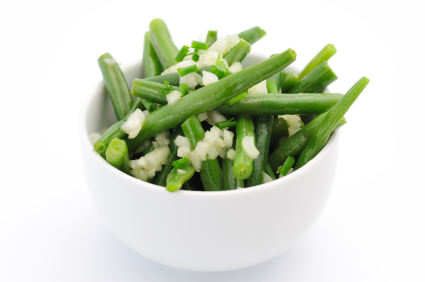 Wash the beans and cut off ends as required. Bring the beans to a boil with the lid on the pan: half under water with a little salt. Cook for 8 minutes. Pour off the cooking liquid. Mix the chili sauce with the beans. Chop an onion and mix it through raw. 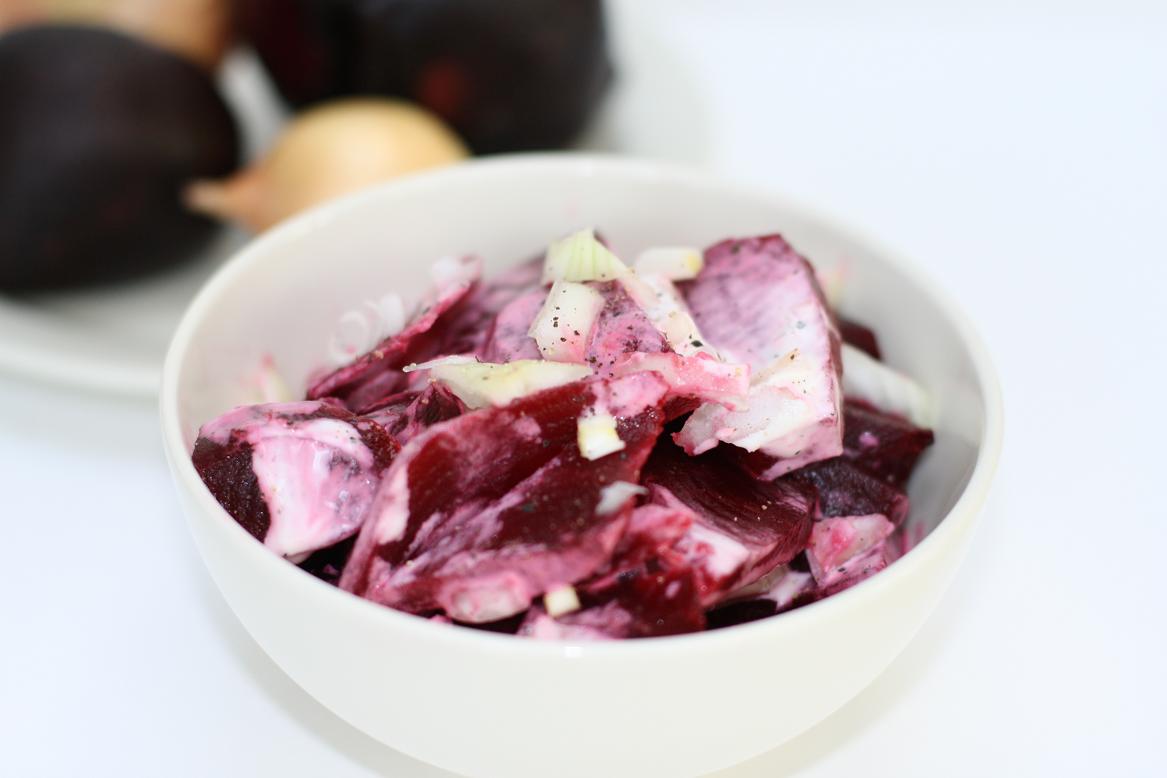 Cut the root of the beetroot and was the beetroot. Cut the beets into slices and halve them. Put the beetroot to the boil with the lid on the pan: half under water with a pinch of salt and a bay leaf. Cook for 40 minutes. (With a pressure cooker going faster) Pour the cooking liquid and discard the bay leaf away. Make a sauce of mayonnaise, yogurt and salt and pepper. Mix it with the beetroot. Chop an onion and mix it through raw. 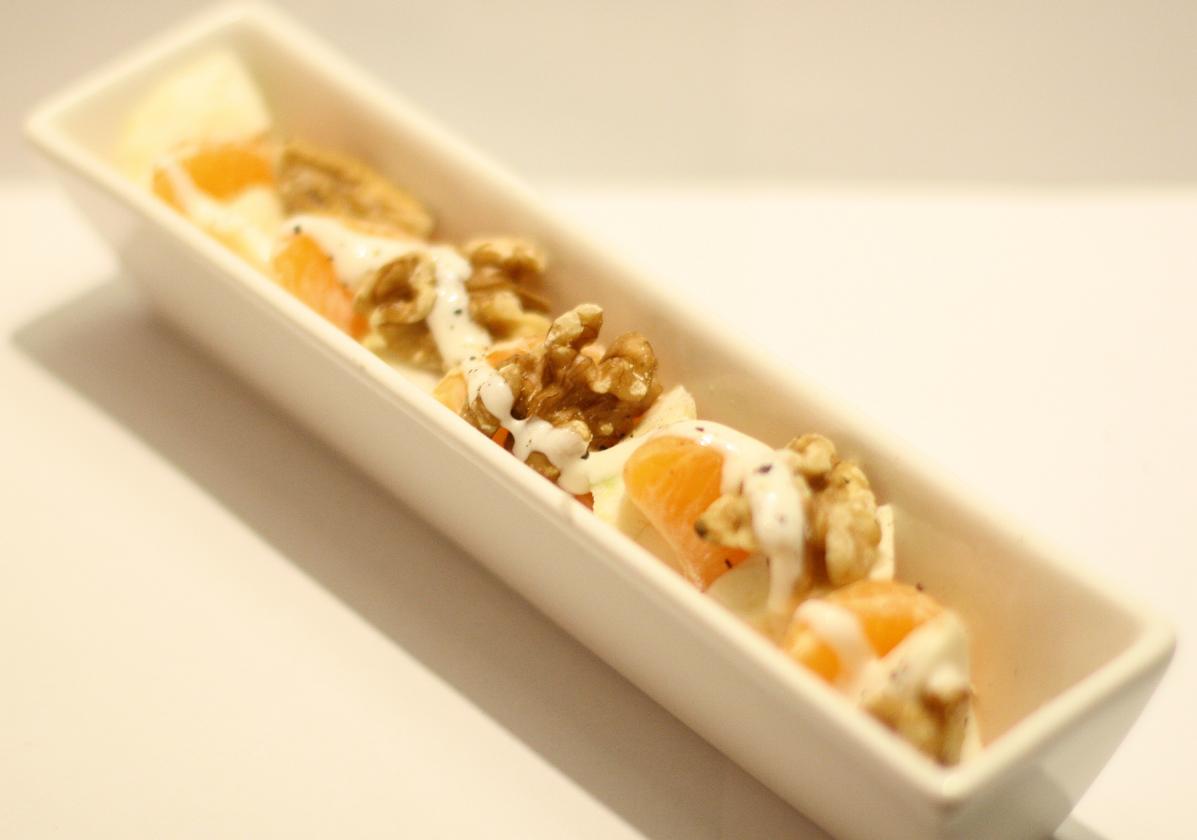 Wash the celeriac. Cut off their tops. Cut the celeriac into strips. Chop the walnuts. (Do possibly in a bag and hit it with a hammer). Mix the mayonnaise and yogurt, add salt and pepper. Mix this with the celeriac and pieces of mandarine.

Sprouts with warm apple and honey 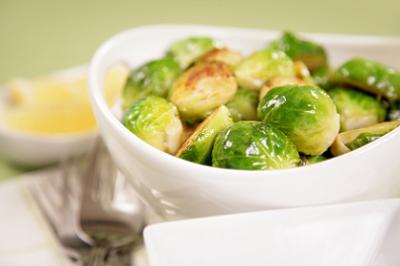 Cut the outer brown leaves of the sprouts until you are left with small green cabbages. Cut the lower part of the stem and cut a cross underneath the sprouts – then they are done earlier. Cook 10 to 15 minutes in a saucepan half full of water, cover the pan. Pour the sprouts. Peel the apples, cut into slices and fry them in a pan until the apple is soft. Add apple slices, honey, ginger and salt / pepper to the sprouts and stir together. 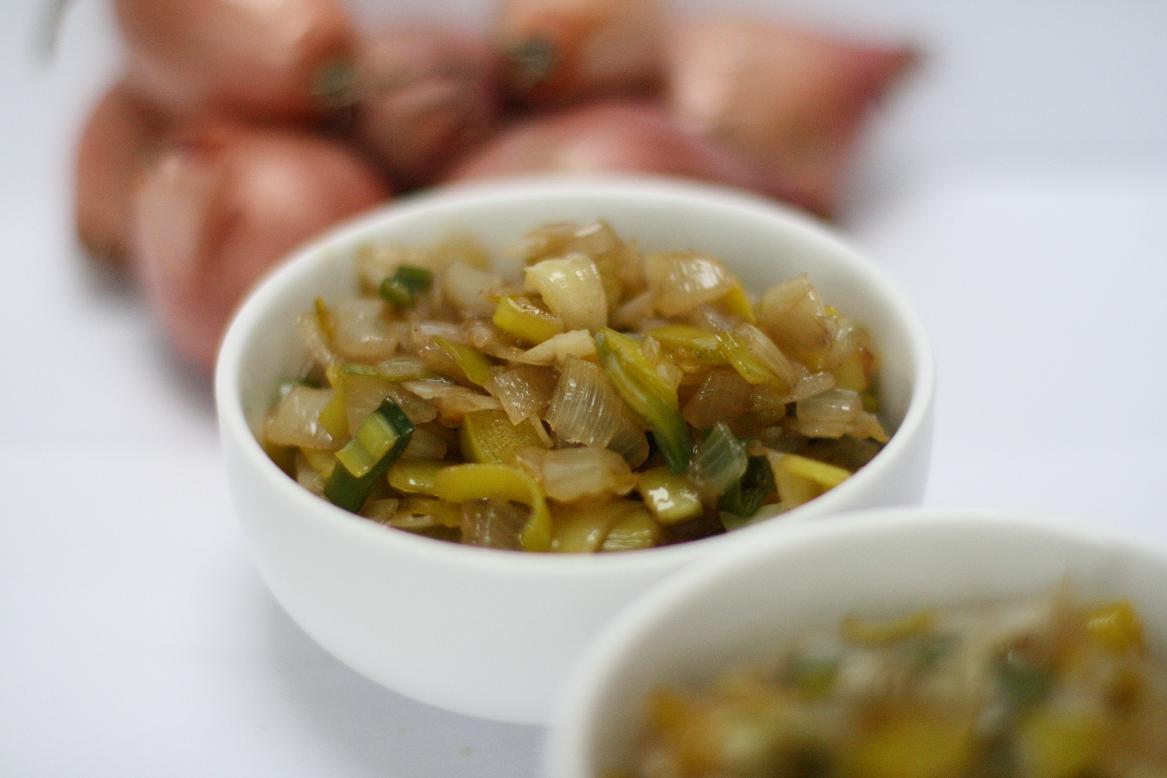 Wash the leek and cut into rings. Remove the outer shell of the shallots. Heat the butter in a frying pan and add the leeks and shallots. Leave for 2 minutes cooked over low heat. Add 2 tablespoons of sugar and 4 tablespoons of water and continue to stir until the water has evaporated and the sugar has become syrup. 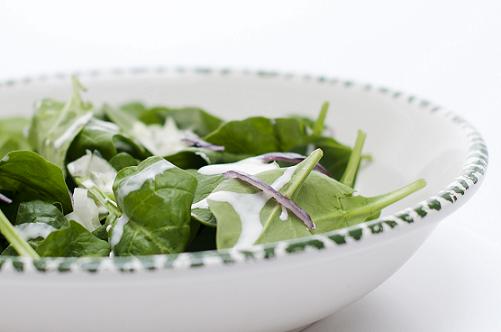 Make a dressing of yogurt, mayonnaise, salt and pepper. Wash the spinach and mix with chopped onion. Pour the dressing over. 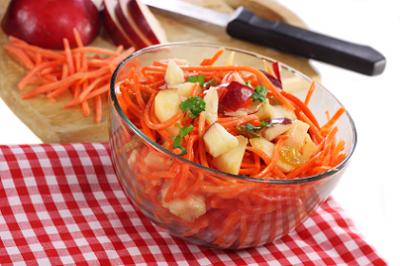 Grate the carrot, peel the apple and cut it into small pieces. Mix in a bowl with the raisins. Mix apple juice, cinnamon, sugar and vinegar dressing. Sprinkle the dressing over the salad carrot.